When it was decided that 1960's built Woodcroft Care Home in Trowbridge, Cardiff, needed to be modernised and made more economically viable, architects agreed that it would be better to design a new build than undertake a refurbishment due, in part, to energy efficiency issues including the more stringent requirements of Part L of the 2010 Building Regulations. Planning permission was granted in 2009 and the following year saw the old building demolished and contractors on site commencing the building work. Only 18 months later, in January 2012, Hafod Care Association opened the new Woodcroft Care Home, a state-of-the-art spacious building that provided greater levels of comfort for residents, as well as improved energy efficiency thanks partly to Spectus Window Systems' Elite 70 PVC-U window system. Spectus' Elite 70 PVC-U system provided the ideal window profile for the care home due to its ease of maintenance and replacement, as well as its exceptional value. In total, 175 white PVC-U windows were installed: 124 in the main 60-bed care home and 51 in the high dependency unit with its 15 apartments. Woodcroft Care Home also features an atrium for which curtain walling was installed using windows as large as 3.5m x 4m. Hafod Care Association employed the services of architects Pentan Partnership for the design of the care home. In turn, Pentan awarded the windows contract to fabricator Vision Products, a supported business providing employment and training opportunities for local people with disabilities. Vision Products has a close working relationship with Spectus and knew its Secured by Design profile, together with its BSI Kitemark for Window Energy Ratings and BS7950 and BS7412 accreditations, would be ideal for the new building. This decision has been welcomed by Huw Lane, technical officer at Hafod Care Association: "It was important for the care home to have high performance double glazed windows that could offer a combination of safety, security, aesthetics and energy efficiency. We simply gave our specifications and were told that the Spectus Elite 70 system perfectly matched our criteria." "There were stringent requirements attached to the contract due to the fact that we house elderly people, some with dementia. For instance, it was essential that the windows had an automatic vent opening in the event of a fire. As a result, some of the windows are integrated with our alarm systems; if the fire alarm goes off, they will automatically open so the smoke can clear and our staff and residents can see their way out safely." "In addition, the windows also have special restrictors on them to prevent anybody falling out. Of course the windows open to a certain degree but again, for safety reasons, it was important that they couldn't open fully." "The Elite 70 system is renowned for its thermal qualities and its ability to deliver U-Values as low as 0.8W/(m²K), which means not only will our residents and staff now enjoy maximum comfort but also, as a care association, we can look forward to significant savings on future energy bills. "Another benefit is that the windows are aesthetically pleasing. We were originally going to use composite windows but in the end we decided on the white PVC-U, which has sharper, cleaner lines and fits in well to the locality." Project architect at Pentan Partnership, Dafydd Tanner said: "Unique to this project is the improved experience now offered, through the design, for residents with dementia. Using the principals suggested by dementia specialists at Sterling University we applied design elements such as memory walls and niches that would help to stimulate the residents and provide ‘destinations’ and ‘points of interest’ throughout the home. Therefore, within circulation areas such as corridors and the atrium there are objects and artefacts that residents are attracted by and can relate to, such as a comfortable seat in a window opening or an old sewing machine at the end of a corridor. "What we have also included is much greater contrast between surfaces such as walls and floors, as well as lots of natural light, so those residents prone to getting lost or confused have good sense of orientation. Dementia can cause stress and agitation so we have designed the building to be familiar and make residents feel at ease. " "The new home is both invigorating and interesting. Take for example the secured courtyard garden that has been created. We've designed it with lowered edges to the south so it receives as much sunlight as possible and it contains visually interesting plants and trees with strong colours and scents to appeal to the senses." The challenges of an ageing population are being felt within the care home sector across the UK. According to Cardiff City Council*, the city's over-65 population is likely to increase by 11.3% by 2019 and a new approach - the Older People's Accommodation Strategy - has been prepared by Cardiff Research Centre in response to these statistics. Peter Colclough, Spectus Window Systems' commercial manager concludes: "With average life expectancy now in exceeding 80** for both men and women, it's no surprise that there's increased demand for quality care for the elderly. " "It's clear to see that the design and specification used at Woodcroft Care Home has really met the needs of both the care association and the residents. Spectus will be continuing to work with its fabricators to supply high quality products that help drive standards up in other care homes, whether it's a retrofit or new build project." 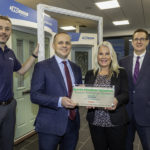 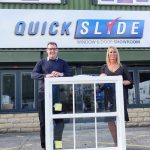